No to the goldfish bowl

Why are goldfish bowls a cruel practice?

It is common to hear people say that goldfish are relatively hardy. It is true that slim-bodied goldfish (common goldfish, comet, etc) are hardy fish, while fancy goldfish are more delicate.However, an unfiltered bowl or ‘mini-aquarium’ is not suitable for any type of goldfish.

Goldfish grow relatively quickly and produce a lot of organic waste: this is why the goldfish bowl / mini-aquarium will only allow them to live for a very short time and in bad conditions because: 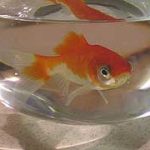 The pet store I usually go to is an example of a good store: before one buys any fish, they first ask: which other fish do you want to put them with? (to identify potential interspecies incompatibility). Then, ‘when was your aquarium first started?’ (to find out if one has a properly functioning filtered tank). Finally, ‘how big is your tank?’

To answer this question, here is a short excerpt from an article found on the BBC News website, entitled “Fish do feel pain, scientists say”. The first conclusive evidence of pain perception in fish is said to have been found by UK scientists. Fish have pain receptors like us. This complements earlier findings that both birds and mammals can feel pain, and challenges assertions that fish are impervious to it. Scientists found sites in the heads of rainbow trout that responded to damaging stimuli.They also found the fish showed marked reactions when exposed to harmful substances.” By Alex Kirby – 30/04/2003
Full article here: http://news.bbc.co.uk/1/hi/sci/tech/2983045.stm