What is aquarium filtration?

Filtration in your aquarium is essential. An aquarium filter must always be running in the aquarium.

A filter provides the following 3 functions: 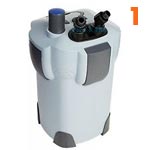 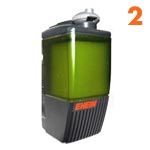 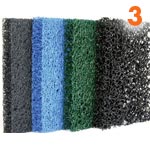 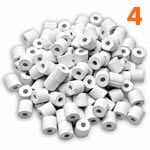 Why is filtration essential for a healthy aquarium?

As soon as they are introduced into the aquarium, fish will start to produce a significant quantity of organic waste, in particular toxic ammonia, through excreta, urine and respiration.

Fortunately, the filter’s highly porous medium (filter sponge for example) is capable of harboring billions of useful ‘cleaning bacteria‘, which are also present in the gravel and decoration. These useful bacteria will transform the highly toxic ammonia into another slightly less toxic substance, nitrite, and finally transform nitrite into nitrate, which is not very toxic except in high doses (to keep it at a reasonably low level, simply change part of the water weekly). This series of transformations is carried out in a continuous “loop” in the aquarium: this is called the nitrogen cycle.

The problem is that when a new aquarium starts, it is almost sterile: the bacteria cannot do their “cleaning” function properly because they are still too few in number… As a result, ammonia and  nitrites that are very toxic to fish build up. This is sometimes referred to as the new tank syndrome.

In case of new tank syndrome, it is essential for the health and survival of fish: 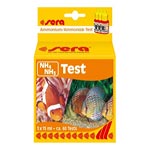 After a few weeks (4 weeks on average), bacteria are established in sufficient numbers to effectively treat the fish waste: the nitrogen cycle is then established (0 ammonia and 0 nitrite). 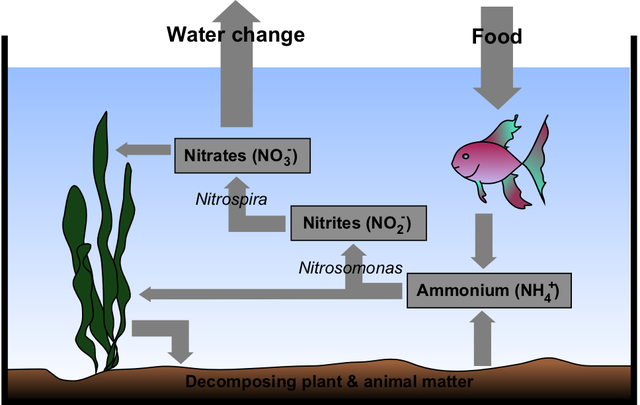 The nitrogen cycle (summary): transformation of ammonia into nitrite by the Nitrosomonas bacteria and then into nitrate by the Nitrospira bacteria. Nitrates, which are much less toxic, are the final product of the cycle. To keep nitrates at a reasonably low level in the aquarium, a weekly partial water change is carried out. In addition, plants can use some of the nitrates as fertilizer. Illustration: Eliashc and Ilmari Karonen (public domain). 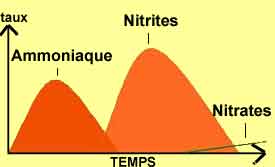 Rise of toxins in a new aquarium (new tank syndrome)

The graph above illustrates the rapid rise in ammonia concentration followed by a sharp drop that shows that Nitrosomonas bacteria have multiplied and reduced ammonia to nitrite. Nitrites increase thereafter very quickly: the Nitrospira bacteria then take over by finally transforming the nitrite into nitrate. It is impossible to give a precise rate or time scale because these values vary greatly from one aquarium to another.

Possible symptoms of ammonia and nitrite poisoning in a new tank are:
(Caution: fish do not necessarily show all the symptoms at once!)

What is fish-less cycling?
Fish-less cycling is a method of maturing (or cycling) a new biological filter before fish are introduced. This alternative method of setting up the nitrogen cycle is a popular option because it does not involve any potential risk to the first fish.

Which filter to choose (choosing the right filter)?

What is the nitrogen cycle in an aquarium?

How is ammonia normally broken down?

Under normal circumstances, when the biological filtration is mature and the filter functioning correctly, beneficial bacteria in the filter will utilise ammonia as an energy source and turn it into nitrite. Other bacteria then use the nitrite and produce nitrate, which you will remove by changing some of the water each week.

How do I test my water for ammonia and nitrite?

It's very simple. Quick and easy to use tests are available in pet stores.

How to speed up the maturation of the biological filtration?

Temperature is one of the many parameters to take into account: bacteria multiply less quickly in cold water (they can even stop multiplying in very cold water).

In order to make the nitrogen cycle in a new aquarium significantly easier and faster, it is possible to take a piece of the filter media from an already established aquarium (mature filter) and place it in the new filter compartment or squeeze out the brown juice rich in bacteria - making sure of course that this aquarium has not experienced any diseases recently - (note: using 'aged water' is also possible but it is certainly less effective). However, make sure that the filter media to be transferred is transported in a bag containing only water taken from the original aquarium. Lastly, you may also add commercial bacterial activators (nitrifying bacteria or filter boosters).

How to keep nitrates under control?

Nitrates are only harmful to goldfish in high doses (long-term swimbladder disorders, slower growth) but small amounts can be enough to feed a large amount of algae. Nitrate is the end product of the nitrogen cycle and can be significantly reduced in two ways: by making partial water changes regularly (once a week or every two weeks) and by planting the aquarium (nitrates are partially absorbed by the plants, which they use as fertilizer).

Should I be doing water changes while my tank is cycling?

If you using the fish-less cycling method (more info here), not necessarily: you may wait until both ammonia and nitrites have dropped to zero and nitrates have risen before doing your first water change.

But if you already have fish in your tank, yes, do partial regular water changes. Performing regular water changes is crucial to the health of the fish and, in any case, beneficial bacteria colonize surfaces like gravel, filter media and plants, so this will not stop the cycling of the tank. Always use a quality water conditioner (dechlorinator) when doing water changes.