How do fish breathe 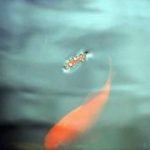 Like us, fish need to take in oxygen and reject carbon dioxide in order to live.

How do fish breathe? Unlike land animals that have lungs to take in oxygen from air, fish have branching organs located on the side of the fish head, called gills, that extract the oxygen contained in water. There is less dissolved oxygen available in water than in the air and water is much denser than air: this requires very efficient mechanisms for the passage of large volumes of water and extraction of dissolved oxygen.

The gills are feathery organs that form the respiratory system in fish, participate in osmo-regulation (regulation of mineral salts) and help to maintain a stable pH. The gills are very delicate but they are well protected thanks to gill covers. It is hard to observe the gills on a living fish because of these protective covers. The bony plates that support the gill covers are called opercles (operculum).

The gills consist of fleshy filaments supported by the gill arches and filled with blood vessels, hence their bright red color. Each filament contains a capillary network that provides a large surface area for exchanging oxygen and carbon dioxide. As the fish opens its mouth, water runs over the gills, and blood in the capillaries extracts oxygen that is dissolved in the water. The fish’s heart pumps the blood to distribute the oxygen throughout the body and carbon dioxide in the blood passes out through the gills back into the water.

Did you know?
Fish are not the only aquatic organism to use gills: mollusks and crustaceans also have gills that operate in a similar way. While most fish have gills, these are not the only respiratory system present in fish as some species of fish, such as lungfish, have the ability to breathe from air. And some amphibious fish (mudskippers for example) have the capacity to breathe through their skin!

Avoid lifting the opercles of a live fish (to confirm the presence of a parasite for example). They are extremely fragile and excessive touching/movement can easily damage them (but someone with the expertise and knowledge can do it safely).

When the gills of a fish open and close unusually fast, this can indicate breathing difficulties. Possible causes: low oxygen (check your water temperature, as warmer water reduces the oxygen level), presence of nitrites in the water (check your water parameters for ammonia or nitrites), parasite infestation, stress. The production of excess mucus or hemorrhage is also a sign of a serious problem (water pollution, parasites for example).

Next page: the brain and nervous system of fish