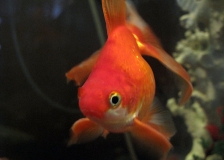 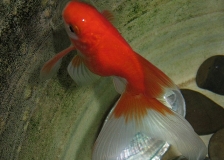 The fantail goldfish has a rounded egg-like body, a large dorsal fin and a double anal fin and a double tail fin. It has no hump or any other fancy features. Fantails come in a variety of colors, including red, orange, yellow, white and calico varieties. Fantails are competent swimmers but avoid housing them with common goldfish or comets as these are far too agile. Similarly, avoid putting fantails with very slow goldfish (telescope, celestial, bubble eye) as these would not be able to compete. Fantails are hardy fish so make an excellent choice for first-time fish owners. As they can reach 15 centimeters (6 inches), plan a minimum of 50-75 liters (13-20 US gallons) per fish. 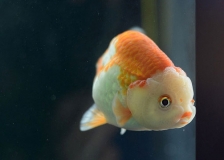 The Ranchu and the Lionhead are quite similar: a very compact body and no dorsal fin. They also both have an outgrowth on the head but it is more developed in the Lionhead. The back of the Ranchu is more curved (90°C angle) in front of the caudal fin than the Lionhead. Ranchu and Lionhead have identical care requirements: their stubby bodies and poor eyesight reduce their swimming ability so avoid housing them with fast swimmers such as common goldfish, comet or shubunkins. Can reach 12-15 centimeters (5-6 inches) or more so plan a minimum of 50-75 liters per fish (13-20 US gallons) in a well-filtered tank.
Picture: Arno - Attribution-NonCommercial-NoDerivs 2.0 Generic (CC BY-NC-ND 2.0) 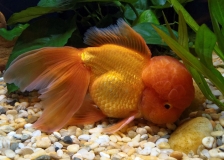 Oranda is a variety with a compact body and a raspberry-shaped cap (hood or wen) at the top of the skull, sometimes covering the entire head. All colour combinations are possible: from red to black, to calico to chocolate. All fins are even except the single dorsal fin. They are quite slow-swimming fish, so avoid housing them with fast swimmers such as common goldfish, comet or shubunkins. Orandas can be a little delicate so not the best choice for a first tank - they are more prone to bacterial infections (wen) than some other goldfish and their compact body makes them prone to swimbladder disorders. Oranda can reach 20 centimeters (7-8 inches): provide a minimum of 100 liters per fish (25 US gallons) in a well-filtered tank. Prefers a temperature of 19° to 24° C. Picture: Lawrencekhoo, CC-ASA 4.0 license. 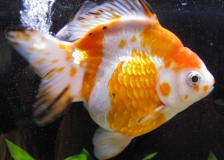 Ryukin are stocky fish with an almost triangular head and a pointed mouth. It is a descendant of the Fantail. Ryukin has very compact body like Fantail but also has a characteristic dorsal hump which starts in the neck region. The Ryukin’s head is more pointed. Pectoral, pelvic, anal and caudal fins pairs; single dorsal fin. The fan-shaped caudal fin can have three or four lobes. Ryukin are competent swimmers so avoid housing them with very slow goldfish (telescope, celestial, bubble eye) as these would not be able to compete. The pond will be suitable for the summer season. Ryukin are hardy but can reach 20 to 25 cm (8-10 inches) so require a large and well-filtered aquarium - 100-150 liters per fish (25-40 US gallons) .
Picture: Lawrencekhoo - Creative Common Share Alike 4.0 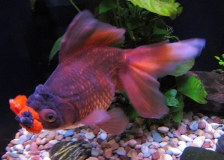 The Pompom displays fleshy outgrowths or 'bouquet' between the nostrils on each side of the head, hence the term 'pompom'. These tufts are also called 'Velvet balls' and are fully developed in adulthood. The Pompom shape and fins are similar to the Lionheads and Orandas heads. Colours: orange, yellow, silver, black and white. As it is rather slow, house the Pom Pom with other Pompoms or slow egg-shaped goldfish to avoid any stress. Not to be maintained with active fish. Avoid any sharp decoration or stone to avoid damage to the nasal growths. Adult size: 10-15 cm (4-6 inches). Aquarium volume: minimum of 50-75 liters per fish. (13-20 US gallons).
Picture: Lawrencekhoo under Creative Commons Attribution-Share Alike 4.0 International license. 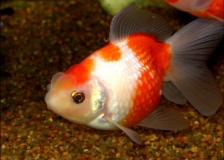 The pearlscale is a small variety with an egg-shaped body and pointed head. Its scales have a pearly appearance (this is actually due to a dome-shaped of calcium carbonate deposits in the centre of each scale), hence the term "pearlscale". Pectoral, pelvic, anal and caudal fins are paired; dorsal fin single. Avoid sharp or abrasive objects in the tank (scales are fragile). Not to be kept with active goldfish. The pearlscale is rather slow, so house Pearlscales with other Pearlscales and placid egg-shaped goldfish, for example Telescopes, Black Moors, Bubble eyes. Prefers a temperature between 20° to 24° C (avoid cool temperatures). Adult size: 10-15 cm (4-6 inches). Recommended aquarium volume: minimum 40 liters per fish (10 US gallons). 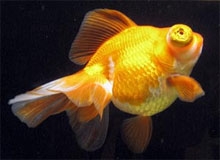 Telescopes are easily recognizable by their curious protruding eyes, hence their name. Round goldfish with paired fins (except for the single dorsal fin). Body and head are very similar to the Fantail. The tail fin comes in different variations (broadtail, veiltail or butterfly tail). Because of their poor vision, do not associate telescopes with varieties of goldfish that are too fast (common goldfish, Comet, Sarasa). The best tank mates are other telescopes or placid egg-shaped varieties (Fantail, Pompom, Celestial, Lion Head...). Avoid any sharp decoration or stone. Tank volume: minimum 75-100 liters per fish (20-25 US gallons).
Photo: Lawrencekhoo sous CC-ASA 4.0 International license. 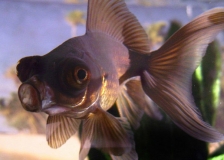 Black Moor are easily recognizable by the velvety black hue of their scales and 'telescopic' eyes. With age, it should be noted that the black matte pigmentation often tends to disappear and turns gray or dark bronze. Sometimes, if kept in fairly warm water, the colour can also turn to metallic orange. Avoid any sharp decoration or stone because it sees poorly and its protruding eyes are fragile. This is a very slow fish so the best tank mates are other Blackmoor or placid egg-shaped goldfish. A mature Black-Moor can reach 15 to 20 centimeters (6-8 inches). Tank volume: minimum 75-100 liters per fish (20-25 US gallons). 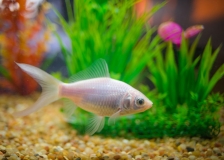 The Comet is quite similar to the common goldfish but more elegant thanks to its spectacularly elongated and well-slit tail fin. The dorsal fin is very high and the pelvic fins very elongated. The pectoral and pelvic fins are paired; the dorsal, anal and caudal fins are singlr. Do not house the common goldfish with slow egg-shaped breeds as these are too slow and will get bullied and stressed, especially at meal times Like the common goldfish, the comet is a good-sized fish (about 30-35 cm - 13 inches ), is very active and therefore requires a very large swimming area - minimum 150-200 liters per fish (40-50 US gallons) or better a pond. Exists in metallic or Calico (American Shubunkin).
Photo: K. Bauschardt - Licence Attribution-SA 2.0 Generic 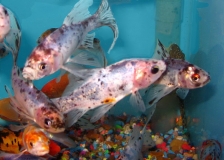 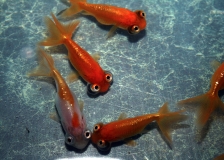 The celestial goldfish is a small variety whose eyes look up towards the sky (the fry have normal eyes: from 2 months onwards, the eyes move upwards to reach their final position 4 months later). The back is curved and without a dorsal fin. Pectoral, pelvic, anal and caudal fins are paired. Subdued lighting with surface plants is obligatory. Delicate and slow variety to be reserved for the experienced fishkeeper. Some fishkeepers recommend against Celestial eye goldfish as their poor vision often causes unfair acccess to food. Avoid lively companions, as well as any sharp decorations and too many obstacles. Other celestial goldfish or telescope are good tank mates. Aquarium volume: minimum 50-75 liters per fish (13-20 US gallons.) 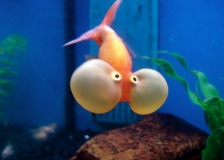 The bubble-eye has two very large fluid-filled bags under each eye. The caudal fin is well slit. Pectoral, pelvic, anal and caudal fins in pairs. It has no dorsal fin. The bubble-eye golsfih is one of the most delicate types of fancy goldfish and requires very special care so it is a fish for the experienced fishkeeper only. Avoid any sharp decorations that could damage the fragile sacs below the eyes. Cover the intakes of power filters if necessary. Use smooth gravel. A subdued lighting with surface plants is required . Bubble-eyes are slow swimmers so house with other slow egg-shaped golsfish. Bubble-eye can reach 15 centimeters (6 inches). Aquarium volume: minimum 50-75 liters per fish (13-20 US gallons).

By continuing to browse the site you are agreeing to our use of cookies.